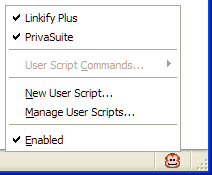 Finally, the User Script Commands... sub-menu lists the menu items for individual scripts which have been added via the GM_registerMenuCommand API. The presence and/or contents (as well as the possible actions) of this sub-menu depend completely on which scripts you have installed. It is common for this sub-menu to be unavailable and greyed out.

In addition, though, this menu provides a list of the scripts whose include and exclude rules match the current page. Each script listed here functions as a checkbox control, and the scripts can be individually enabled or disabled by clicking on them here.

There are a few other "hidden" shortcuts in the monkey menu. First, a middle-click (your scroll wheel usually functions as a middle button, if your mouse has one) on the monkey icon will open the manage dialog. Second, a right-click on a script in the list will fire up your editor (see the edit button above) on the script that you clicked on.

These shortcuts (especially the latter) are designed for advanced users. However, if you can remember them, and have a need for them, they can be very handy!